The Internet of Things (IoT) is huge, but just how huge seems to still be up for debate. From smart temperature and pressure sensors that alert plant managers long before a piece of equipment fails to supply chain management tools that have dramatically reduced inventory loss, businesses in virtually every major economic sector have embraced Internet of Things (IoT) solutions to core business problems. As of right now, there are anywhere from 12 to 21 billion devices connected to the IoT (the exact figure depends mostly on which ‘Things’ get included in the data), and it now seems that could see 30 billion Things connected by 2020.

So welcome to the hyperconnected world: Smartphones, of course, but also smart cars, smart factories, smart lightbulbs, and smart toasters. To paraphrase an old IoT adage, if it can be connected to the internet, someone will eventually connect it to the internet.

Defined by the Internet of Things Global Standards Initiative as, “a global infrastructure for the information society, enabling advanced services by interconnecting (physical and virtual) things based on existing and evolving interoperable information and communication technologies,” IoT has transformed the way businesses track inventory, maintain plants, and interact with a global consumer base. More devices are joining the IoT each day, and this vast interconnected network is a major force in the global economy. The IoT has gone from being an already sizable $157 billion market in 2016 to what is widely expected to reach over a $450 billion market cap by the end of this decade.

But with estimates of the size and overall value of the IoT so drastically different depending on which report you’re reading, how can a business owner really know that IoT is a strong investment. After pouring over the most extensive IoT research currently available, we picked out three key points we think will be the most important for business professionals to know as they think about jumping on the IoT bandwagon. We explore these in greater depth in our forthcoming Business Applications of the Internet of Things whitepaper, but here are some key takeaways:

There will probably be between 20 and 30 billion connected IoT devices by 2020... more importantly for businesses, the rate of device growth is holding steady

At the start of the decade, at least two major reports put the estimated number of IoT devices by 2020 at 50 billion, and one 2012 investor forecast from IBM overshot the mark to the tune of 1 trillion connected devices by 2015. Since the initial phase of IoT media hype, forecasts have come back down to earth, with most firms predicting somewhere between 20 and 30 billion devices by the year 2020. The most conservative of the major forecasts, made by the technology research firm Gartner, put connected devices at 20.8 billion. 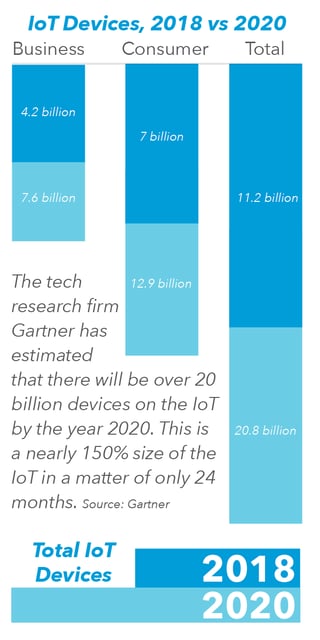 These predictions vary by billions of units, and without a nuanced understanding of the underlying assumptions used by each research group, it can be difficult to translate the figures into any kind of insight or actionable intelligence. Fortunately, a more valuable statistic can be gleaned from looking at the year-by-year numbers coming out of Gartner, McKinsey & Company, Forrester, SAP and others.

Overall, the compounded annual growth rate (CAGR) for IoT devices within all of these predictions is relatively close, ranging from around 25% - 35% in most cases. This is a key takeaway for professions looking to make sense of all these predictions - the number of devices is not nearly as important as the rate at which the entire network is expanding, and combining across all forecasts, we can reasonably assume that the IoT network grows by about one third every year.

The market for IoT devices will be enormous, and growth rates look the same across different economic assumptions

Similar to the forecasts on number of connected devices, various enterprise organizations and think tanks have released very different monetary growth forecasts for the IoT over the last year. The variability here is again mostly due to the underlying methodologies used ingenerating the statistics:

Digging deeper into each of these forecasts, it is once again possible to extract a meaningful growth statistic and see that the overall forecast for the IoT market (and its corresponding economic impact) is broadly in the 15% - 20% CAGR range. Regardless of particular methodologies regarding what exactly was counted in each of these forecasts, CAGRs in this range emerge from the vast majority of major forecasts. Importantly for professionals looking to leverage IoT solutions, even the low-end estimates surveyed here would seem to present a major growth opportunity for businesses.

Embedded in the aggregate data, three key verticals and 1 key ‘Thing’ are currently accounting for IoT growth in enterprise

Organizations are investing an unprecedented amount in IoT solutions, but growth across verticals is far from equal. Verizon’s annual State of the Market: Internet of Things report showed that manufacturing, transportation, and utilities dominated both growth and spending in the broader B2B IoT space: new manufacturing devices connecting to the IoT were up 84% in 2017 relative to 2016 numbers, and 40% growth was seen in both the utilities and transportation markets.

Within these verticals, this explosion of growth has been largely driven by the broader adoption of smart sensors connected to the IoT. Zion Market Research looked specifically at the IoT sensors market in its lengthy report released last year, and with a CGAR of 24%, sensors make up one of the fastest growing ‘Things’ markets on the B2B side of IoT. Within this market, nearly 80% of these sensors fall under pressure (36%), temperature (26.2%), or light (17.3%) categories, all of which are core operational components with the manufacturing, transportation, and utilities/energy industries. 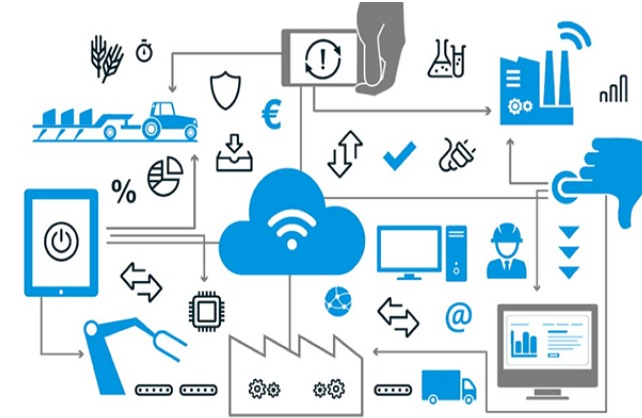 We'll be bringing you reports and insights from both the B2B and B2C spaces on the most exciting parts about the Internet of Things in 2018. At TSL, we couldn't be more excited by the prospect of a world that is more connected, and we're looking forward to sharing our thoughts and research in the coming weeks.

The time has never been better to look into investing in IoT solutions: Again, welcome to the hyperconnected world.

I know this may sound a little passe, but it's very important to me: the Internet of Things doesn't have any meaning [as a standalone entity]. What we paid attention to,...